The present CEO of online gambling firm bwin.party will earn an impressive amount of money if company is taken over by 888 Holdings. BWin.party has been going through a tough crisis for several years now and negotiations with 888 Holdings are on the verge of closure. If the deal materializes and the firm is purchased, then CEO Norbert Teufelberger will make a fortune from the deal as he owns 13.3 million shares. While he will make around GBP 17 million on these shares he can make an additional sum on his 9.2 million deferred shares and options that can be cashed out as well. 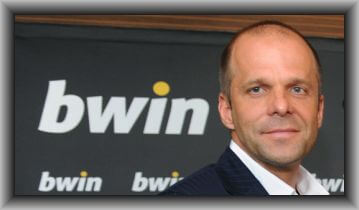 Norbert was the CEO of BWin Interactive in 2001 and became the joint CEO when it was merged with Party Gaming and became the BWin.Party in 2011. He has been accused for the downfall of the merged organization due to lackadaisical management. Experts bought in to evaluate the financials of the firm have stated that both Party Gaming and BWin were top brands when the merger was done but have been going through a tough phase since 2011. After the merger Bwin.Party became the largest online gambling firm in the world with representation in all online gambling fields like casino, slots, sports betting with operations in both regulated and unregulated markets.

The first potential buyer was GVC Holdings which made a bid for BWin.Party in partnership with Amaya Inc through reverse takeover as its market capitalization is double the size of GVC Holdings’ valuation. The bid by 888 Holdings was announced only last month through a public announcement made on 18th May. Besides these two publicly announced takeover partners, the firm has stated that it is talking to several parties for sale. The firm is publicly traded on London Stock Exchange and is owner of global brands like bwin, partypoker and Foxy Bingo. It has hired Deutsche Bank to manage its sales and acquisition dealings after a partner is finalized.